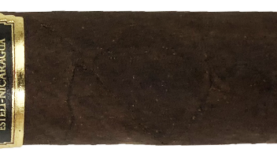 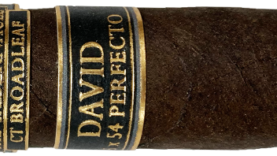 Foundation’s Tabernacle has been a hot brand for the last 5 years. Today, you can find this blend in a couple blends and a bunch of different sizes. Most recently blender Nick Melillo released a perfecto size of the cigar called the David (and another larger perfecto called the Goliath). In this smokedown, we’ll put the original Tabernacle Robusto head to head against the new David size to see which one of these two actually offers more value.

Wrapper Leaf This one is interesting. Both of these cigars have the same blend. So the wrapper leaf is going to be the same USA Connecticut Broadleaf on each. But somehow the wrapper on the David size seems smoother and more oily, while the robusto size is more rugged looking. For that reason, the David easily scores this point.

Cap This point is really more a matter of construction, but it’s a visible sign of good contstruction. The Tabernacle Robusto displays a nicely applied double cap, while the cap of the David size is more complex and somehow appears to be applied more evenly. Also, I gotta give credit for the cap on the David. Perfectos are really tough to roll, and most factories only have a handful of people who can make them. So the David wins this point aswell.

Cigar Ring This one is easy for me. Between the Robusto and David sizes, it’s the David that offers the most opulance. As a limited production cigar, it’s adorned in a secondary band and image of David standing over Goliath holding a sword. I don’t think there’s any way to award this point to a cigar other than the David.

So for the category of presentation, the David wins on all three accounts.

Ash When a cigar holds a good long ash it’s a great sign that skilled hands were involved in the rolling. To award this point, I alternated puffing on the Robusto and David. Then I just watched for which ash would drop first. After about an inch of smoking, the ash fell off the Robusto. The David continued to hold it’s ash for an additional inch, which was an impressive way to earn this point.

Draw This was one of the biggest differences between the two cigars. The change in size and shape certainly impacted draw. The Robusto offered a pretty normal drawing experience, while the David started off tight. And a tight draw on a perfecto isn’t anything to worry about. Typically after you smoke into the foot, the draw opens up pretty quickly. However with the David, the draw remained much tighter than the Robusto throughout the smoke. And that put this point squarely in the Robusto’s column.

Burn Like the draw, the burn was another big point of difference for these two. Again, the Robusto offered a pretty normal burn. It was straight without any need for touchups. The David, on the other hand, burned badlydown one side causing me to have to touch it up a couple times through the smoke. This is one thing that drives me crazy while I’m trying to enjoy a cigar, so this point went straight to the Robusto.

When it comes to the category of construction, the Robusto mopped up.

Complexity Both sizes of the Tabernacle offered similar flavor profiles. Yet the differences in construction really changed the experience. Both cigars offered notes of dark chocolate, leather, and black coffee. There wasn’t a significant enough of a difference between the complexity of these two to say that one was better than the other. So this one is a draw.

Consistency While complexity was a draw, consistency certainly wasn’t. This is a measure of how much of the flavor profile is offered immediately from light up and through the last puff. Between these two sizes of the Tabernacle, the Robusto size showed better consistency at nearly every turn. Not only was there a better flavor at light up, but there was more overall flavor through the smoke. I’m not sure if its because of the bad draw or bad burn on the David size, but this point is easily awarded to the Robusto

Wrapper Sweetness This point is, perhaps, most important to talk about in conjunction with Broadleaf cigars like these because a good Broadleaf cigar should have a natual sweetness to it. And, in the same way that the Robusto offered a better, smoother, and more consistant flavor than the David, it also presented a wrapper sweetness that was in nice balance with the rest of the profile. The sweentess on the David was much more muted in comparison. So this point has to go to the Robusto

And this final and critical category goes to the Robusto