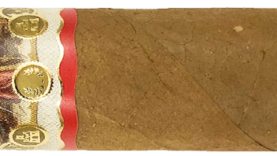 In the wide world of Connecticut Cigars there’s a lot of competition. Everyone seems to be working to craft the perfect Connecticut… well, everyone except AJ Fernandez. He’s one step ahead of the competition with two popular shade blends. The question now is – which of AJ’s mild bodied blends offers a superior experience? Let’s find out in this smokedown!

In this Smokedown, we’ll take these two blends through three rounds to examine their Presentation, Construction, and Flavor. Each round has 3 points which determine who wins the round. Let’s jump in.

They say not to judge a book by it’s cover…. but that’s what we all seem to do. For that reason, a cigar’s presentation is very important. In this round, we’ll give both of these blends a close look over to see which one is better in show.

A good wrapper leaf is an important part of a great presentation. Between these two cigars, the wrapper leaves both present very well. Each is a smooth, evenly colored leaf with little to no blemishes. Truly the only discernable difference is the color. The San Lotano’s wrapper has a reddish shade when compared with the New World, who’s wrapper is the color of coffee with cream.

In the end, it’s the New World that gets the point here. It’s that coffee with cream color that really suggests a creamy smoking experience (although it doesn’t always turn out that way).

This is another area where these two cigars are incredibly close. They both show off nice double caps. However the New World shows a somewhat sloppy application. A couple of tears in the leaf and even a little patch work on the shoulder of the cigar have cost the New World the point… especially in comparison with the nearly flawless cap of the San Lotano. So the San Lotano gets the point here.

Both of these cigars have fantastic artwork. This is one area where AJ Fernandez has always done very well. These two cigars both present with completely different artistic elements.

The New World gives off a bright look with a white nylon foot band and a classy ring that shows off the explorers of the new world. The San Lotano’s band displays a similarly historical scene with lots of gold embossed design work around the outer edge of the ring. For this one, I chose the San Lotano, which is a classier and more classic design to me.

This is the measure of how well a cigar can offer it’s flavor profile. A cigar can have the most incredible flavor in the world, but if it doesn’t perform well due to terrible construction then the flavor won’t matter.

This one is pretty simple. I lit both of these cigars at the same time and alternated puffing between each. I also watched to make sure neither burned farther than the other. Both blends held admirably long ashes, which reached about 1.5 inches before the San Lotano’s fell off in my lap. So this one goes to the New World.

Both blends had perfectly acceptable draws. At the same time, they didn’t have the same level of resistance. The San Lotano’s draw required a bit more effort than the New World, who’s draw was just looser. The New world also had a much cooler draw as I smoked my way through the second third. For me, both the looser draw and cooler burn both brought the New World into the winner’s circle for draw.

This is the round that really counts. A cigar can have the most amazing presentation in the world, and the best construction imaginable. But if it doesn’t have epic flavor, then who is going to care about it?

This is the measure of how much of the total flavor profile is available from light up. If a cigar has great consistency, you’ll taste all of the flavor right away. If the consistency is poor, then it’ll take some time to get to the full profile. Both of these cigars had good consistency, but it was the San Lotano that really wow’d from light up. It led the New World, which took nearly a half inch before all the flavor notes showed up. So the San Lotano got the point for this one.

These days, a complex flavor is the sign of a great cigar. A good complex flavor should have a nice intricate flavor with flavor notes that go well together and are well balanced. Both of these blends offered nicely balanced flavor profiles (with the exception of the unbalanced sweetness on the San Lotano). The San Lotano offered notes that are, to me, standard Connecticut notes. I tasted woods, nuts, and a mild sweetness. At the same time, the New World had some of the same standard Connecticut notes with a nice caramel note. The New World also offered a better balance with regards to sweetness. So when it comes to complexity, I gave the point to the New World.

For me, the New World Connecticut is the overall winner of this Smokedown. But the thing that really matters is your opinion of these cigars! Please drop a comment with your thoughts on these blends!