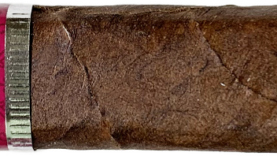 The La Gloria Cubana Spanish Press is a four country blend with medium strenght. Light up this cigar to get flavors of coffee, leather, cinnamon, sweet and spice. This is a great cigar for anyone who wants a robust flavor that doesn't kill with strength.

Big surprise, La Gloria Cubana’s Spanish Press is a box-pressed cigar. But this blend uses an old pre-embargo style of box pressing. And while this blend uses an old pressing style, the cigar itself was released in 2019. It features an impressive four country blend with leaves from Nicaragua, Brazil, Mexico, and the Dominican Republic. My question is, can the combination of old school construction and a new blend truly produce the experience needed to impress the discerning cigar aficionado of today? And the only way to find out is with a cut and a light.

The kickoff comes with an impressive balance of spice and sweetness. It is, in my experience, very rare to find balance of this nature so early on in any cigar. There’s also a healthy introductory flavor profile with notes of coffee, leather, and cinnamon. But unlike other similar cigars, the flavor with this one is very roasty. And even though my spell checker is notifying me that ‘roasty’ is not actually a word… but I stand by it as a describer for this flavor.

A bad burn has begun to plague my experience with the Spanish Press. And this is not altogether unexpected as box-pressed cigars tend to have burn issues. And I’m not sure if the ‘pre-embargo style pressing’ contributes to the burn being worse than with other box-pressed cigars, but it’s become particularly annoying.

The flavor on the other hand is still a roasty toasty medium strength flavor bomb. If I could sum it up into one food item, I might call this buttery cinnamon toast. The spice and sweetness continue to come along nicely. But there’s one other big thing that jumps out to me – an additional sweetness from the cap. This cigar has a VERY subtle sugary sweetness on the cap, even though this is not a sweet tipped cigar. This is something that a lot of cigar smokers have noticed with various non-sweetened cigars as of recently. I’m not sure what causes it, but in the case of the Spanish Press, it is not a distraction from the profile. So I’ll enjoy it as I smoke.

The second third continues with the first third profile, with the limited exception that spice drops to the background of the flavor. At the same time, there’s a nice cinnamon coffee finish to this profile. I find that coffee is a pretty standard finish, but the element of cinnamon is a nice upgrade to the traditional finish.

This is where the flavor profile has left the party. The traditional final third has reared it’s head, and now there’s a lot of heat in the smoke coming out of this. Plus, there’s a bitterness in this flavor that has become the central note in the profile, which is sad because that’s when most people stop smoking, which is exactly what I’m doing here.

This cigar presented a lot of really nice qualities. The most notable is the balance of sweet and spice from the outset. While the final third wasn’t a positive experience, I think the rest of the smoke is a compelling enough experience that I would recommend this medium strength cigar to a wide variety of cigar smokers.