Can Your Cigar Lighter Do This?

How to Find The Perfect Cigar Lighter 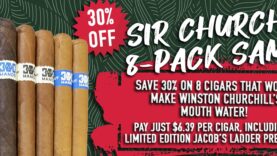 Sir Winston Churchill is, without a doubt, the most well known cigar smoker of all time. During his long life of loving cigars, Churchill had some notable habits. But if he were alive today, how much would he fit in with the cigar smoking crowd? In this video, I’ll take you through Churchill’s top 12 cigar smoking traits so you can see how similar or different you and Sir Winston might have been!

While he was famous as a cigar smoker… and certainly had some peculiar habits, Churchill also wasn’t altogether different from other more ordinary cigar smokers. Below I’m listing 12 facts about his cigar smoking life. Track your progress by awarding yourself one point for each fact that you have in common with our famous cigar smoking friend. Then drop a comment with your score, and which of these sounds the most like you.

1. He started by smoking cigarettes… as a teenager

He was 16 years old when his mother wrote him a letter asking him to stop smoking cigarettes. She offered him a pistol and a pony if he agreed to stop for a few years. Of course, he negotiated it down to a few months. But I’ve heard from a lot of cigar smokers who got started with cigarettes and eventually made the switch. And a switch is exactly what it was for Winston. Later in life, he smoked A LOT of cigars but refused to touch cigarettes.

2. He fell in love with cigars while traveling abroad

After he finished school, one of his first postings was in Cuba, where the nationals were involved in a revolution against Spain. That’s when he fell in love with Cuban cigars. I think there’s something about traveling that causes a lot of people to become open to new experiences. Certainly, some of my favorite cigar smoking memories have been while traveling abroad. And I know more than a few people who have kicked off their passion for cigars while on vacation.

That’s a lot of cigars!!! But it’s true, Churchill reportedly smoked about 10 cigars a day. After his trip to Cuba, he was rarely without a cigar. His friends, associates, and even some Cuban cigar dealers kept him well supplied. Plus, he lived in the 1800s-1900s when you could still smoke pretty much anywhere you went. Today, it’d be physically tough to smoke that many cigars a day.

4. His clothes were covered in ash and burn holes

As you might imagine, smoking 10 cigars a day produces a lot of ash! And Winston ended up wearing plenty of his own ashes. His clothes were covered in ash and holes from burning embers. It was something his wife battled. She even made him a special cigar smoking bib to try to contain the mess, but it never did. And these ash and burn holes were his constant companions.

5. He spent too much money on cigars

This is one that I hear people talking about online a lot when it comes to their own love for the leaf. But Churchill spent a TON of money on cigars. There’s no way to calculate exactly how much, but he once had a valet who reported that Churchill smoked the equivalent of a week’s wages for a valet in just 2 days.

6. He chewed the ends of his cigars

This is something I have heard cigar geeks talk about as reprehensible. I’ve even heard of at least one cigar maker who says that chewing and slobbering on the end of your cigar means you’re not a real cigar smoker… but that cigar maker doesn’t have a popular cigar size named after him… so I take that with a grain of salt. Churchill chewed his cigars constantly. There were times when he was in meetings or reading over documents and he wouldn’t puff on his cigar very much at all. Mostly he would just struggle to keep it lit, and chewed the end until it was a gnarled nub.

7. He built a humidor at home

In today’s world of DIY projects, this kind of project would be an amazing one to behold. But he built (or had built) a 3000 – 4000 cigar humidor. Certainly, many of us have humidors at home. But in my book, you’d easily score this point if you’ve taken cigars seriously enough that you’ve built your own humidor, or you have a big one that holds thousands of cigars. Either way, you’re as much of a fanatic as Churchill at that point.

8. He had his own system for organizing, labeling, and cataloging his cigars

The OCD crowd is about to need a change of pants. But Churchill had his own system for labeling and categorizing his sticks. I guess you sort of would need that if your humidor had thousands of cigars in it. But this is exactly the kind of thing I see people doing with their own collections. Some are more thorough than others, but one way or another we all make our collections work for us.

9. He had his own favorite cigars accessories that he traveled with

Sir Winston had this silver ashtray that would be laid out for him every morning. When he traveled, his custom luggage had a special compartment for his favorite ashtray. That way he had it with him wherever he went. I think this one resonates with a lot of cigar smokers. These days, I think a lot of us have our own favorite accessories for when we’re headed out to smoke with friends.

10. He had a special oxygen mask that allowed him to smoke at high altitudes

This one actually blew my mind and made me 10 shades of jealous. During World War II, Churchill had an oxygen mask made that allowed him to enjoy his cigars even when he wasn’t close to sea level. I have no idea how the thing worked… but I want one, as I imagine you do too.

11. He had his own favorite brands

This is an easy point to score. Unless you’re just getting into cigars and learning about the different brands and blends available, I think we all have some brand names we rely on. For Churchill, there were two. He loved Romeo Y Julieta and La Aroma De Cuba. He would smoke cigars from other factories, but he always returned to the two he fell in love with.

12. He believed that cigar smoking calmed his nerves

This is a big one for a lot of cigar smokers. Of course, we’re all beyond believing that cigars come with inherent physical health benefits. But there are some compelling ideas around how nicotine calms the nerves, and Churchill certainly felt it. He even once wrote, “How can I tell that the soothing influence of tobacco upon my nervous system may not have enabled me to comfort myself with calm and courtesy in some awkward personal encounter or negotiation, or carried me serenely through some critical hours of anxious waiting? How can I tell that my temper would have been as sweet or my companionship as agreeable if I had abjured from my youth the goddess Nicotine?”

Ok, so how’d you do? Drop your score, and which cigar loving trait stands out the most to you!

Much of the info in this video comes from Biography.com

How To Double The Life Of Any Cigar Lighter

How Liga Zebra Became Cigar Of The Year

How To Piss Off A Cigar Connoisseur