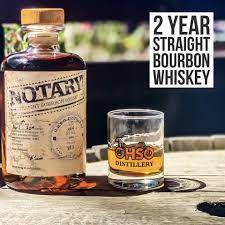 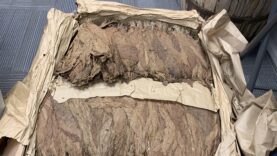 Barrel-aging… it’s an interesting sounding idea. It’s a process that harnesses two things that most cigar smokers love – aging tobacco and barrels (who doesn’t love barrels?). Today, Justin Andrews from Diesel Cigars and I will take you inside the world of barrel-aging tobacco. We have 100 lbs of Honduran Habano Binder leaf and some charred bourbon barrels from O.H.S.O Distillery. Now it’s time to see what this barrel aging business is all about!

Cigars In This Video:

The Diesel Whiskey Row uses a binder leaf that has been aged for 6 months inside bourbon barrels from Rabbit Hole Distillery. It features an Ecuadorian Habano wrapper over a Mexican San Andres Barrel-Aged Binder. While kicking off this experiment, I learned that a thicker sturdier binder leaf is more suitable for the barrel-aging process.

The Diesel Whiskey Row Sherry Cask is a follow up blend that uses a rugged Connecticut Broadleaf wrapper with a Brazilian binder leaf. This one features a bit more sweetness from the sherry cask aging process while achieving a more powerful full bodied flavor profile from the Broadleaf wrapper.

Under the Bung Hole

For this project, we’re using barrels that were previously used by O.H.S.O. Distillery to make Notary Bourbon. Like pretty much all other bourbon barrels, these ones are charred on the inside before they’re filled with Bourbon. After the distillery is done using them, they’re typically disregarded or chopped up to be used as firewood.

According to Justin Andrews, who knows a lot more about charred bourbon barrels than I do, all barrels are rated for their char level on a scale from 1-5 (for severity of char). The barrel that we’re using is about a level 3 char… all I can tell you is that the barrel smells like sweet sweet glorious bourbon!

Get to know your tobacco

I was blown away when Diesel sent me 100 lbs of whole leaf tobacco. It reminded me of the old days when I used to roll cigars as a hobby (before I ever worked in the cigar world… and I was terrible at it). The tobacco came bunched in groupings called ‘Hands’ of tobacco. These are the same types of bunches they use when stacking the leaves into pilons for fermenting in cigar factories.

These leaves are Honduran Habano Binder leaves. And I’m told that there’s about enough binder leaf here to make 10,000 cigars! We’re using this type of leaf for a few different reasons. First, it’s a pretty thick and sturdy leaf, which makes it prime for barrel aging. Secondly, Habano leaf is ‘pretty hard to screw up’, as Justin puts it… and there’s a pretty good chance I’ll screw this up at some point.

By itself, this binder leaf is doesn’t bring a tremendous amount to the table with regards to flavor. When smoked alone (in a fuma) the leaf produces a some spice on the front of the tongue and in the back of the throat. It also has a medium bodied presence, without any clearly defined flavor notes.

I’m excited to use this leaf because, to me, it’s about as close as you can get to a blank canvas. So this should be a prime example of what barrel-aging produces in a leaf over time!

The Art of Barrel-Aging!

We stacked the hands of tobacco in an almost star shaped pattern. Our goal was two fold:

As we stacked the tobacco in the barrel, we carefully placed three probes from an electric thermometer at various heights of the interior. This will give me a good read on the tobacco and help ensure that it doesn’t begin fermenting. We also used a few 360 Gram 72% Boveda packs to keep the tobacco humidified over the course of the next few months.

Once we finished setting everything up, it became time to play the waiting game. At this point, I will be waiting 2 weeks before rotating the tobacco (I’ll make another video for that one). Then I’ll roll another fuma to check on the progress (that’ll be in the next video too).

But I have to tell you, on a personal note, this is one of the most exciting things I’ve gotten to do in cigars! I hope you’ll join me for this series!

And drop a comment, what has your experience with Barrel-Aged cigars been like? Have you had any? If so, did you like them? I hope to get to chat about this more with you in the comments.