My Father No. 1 Cigar Review 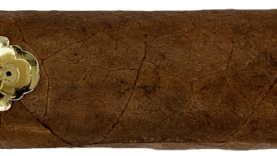 Gran Habano's Black Dahlia is an interesting medium strength blend with a not so common Nicaraguan Shade Corojo wrapper leaf over an exotic blend of Colombian, Costa Rican, and Nicaraguan fillers. The profile even offers some intriquing notes. Light up one of these to taste cinnamon, almonds, oak, and cherries, with a mild pepper on the tongue. This is the perfect blend for anyone who wants something medium in strength that might go great with a quality bourbon.

NOTE TO AUDIOPHILES: My audio was corrupted for this video, which means I had to rely on my backup audio. Consider your ears duly warned.

Gran Habano’s Black Dahlia is a boutique style blend crafted by 4th generation cigar maker George Rico. This one uses are, not common, Nicaraguan Corojo Shade wrapper leaf, over a promising blend of Nicaraguan, Colombian, and Costa Rican fillers. It sounds like an interesting blend, but I wonder if this exotic collection of leaves can actually put out the kind of flavor that will wow the discerning aficionado of today. And the only way to find out is with a cut and a light.

The first few puffs of this dark Shade Corojo offer a lot of flavor… without a tremendous amount of balance. This is not necessarily a bad thing, especially as the profile has a complex compilation of cinnamon, oak, almonds, and pepper. The pepper is slight and not found on the retrohale, but on the top of the tongue. It’s a nice departure from light up profiles that are lacking in notes all together. This one has the slight drawback of being very cinnamon forward. But that’s nothing that turns me off at this point.

Nearing the end of the first third, the burn turned on me. One side of the wrapper just wouldn’t burn, leaving a sort of reverse canoe effect. After touching the wrapper up with the tip of the flame from my lighter, the flavor came back with a vengeance. In addition to the light up profile, which is cinnamon forward but better balanced, there’s a nice cherry note. I’m not certain I have ever tasted a cherry note on any cigar before. This one might be a first for me.

Passing through the halfway point, the flavor hit a high point… but not like most cigars. Instead of a creamy balanced flavor, which is typical, this one offers more of a thick bread-like texture to the smoke. It’s almost like the smoke is chewy… even though it’s actually just smoke and isn’t chewy at all. The flavor profile just tastes so well filled out that it give that feeling.

Nearing the last few puffs, this blend holds onto two notes most clearly. Both cinnamon and cherries are discernible as the profile gets stronger, and the smoke even becomes a bit hot on the tongue. Surprisingly, wrapper sweetness hasn’t played a significant role in this blend at any point, but to be fair I only just noticed it in the final third. So I don’t think I missed it too much. Overall, this was a fascinating blend that wasn’t your run-of-the-mill Corojo. I liked the flavor that I got, which came off as pretty unique… especially for a brand that has been around for as long as Gran Habano has.

Of course, that’s just my opinion. If you have had the Gran Habano Black Dahlia, drop a comment and let everyone know what you think of it!