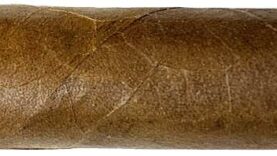 The Diesel Sunday Gravy is a medium strength blend that features an Ecuadorian Habano wrapper over Nicaraguan binder and fillers. Light one of these 6x54 toros up to taste notes of leather, oak, graham cracker, espresso, pepper, and sweetness. This cigar will be a familiar friend to fans of Diesel Cigars, and is likely a great cigar to try as a 'first Diesel Cigar ever'.

There is a long standing battle among mothers the world over to determine who has the best gravy recipe. Now Justin Andrews thinks he’s got a cigar recipe that might just make the cut. The Diesel Sunday Gravy is supposed to be the ultimate gravy recipe of cigars. But Diesel is also known for creating blends with a lot of power. So my question is – can this limited edition blend pump out the flavor that will please Diesel fans everywhere? The only way to find out is with a cut and a light.

This blend introduces itself with some nice medium pepper through the retrohale. There’s a very subtle sweetness that sits behind two notes, which dominate the entire palate – leather and oak. Both of these are notes are ones that I expect to find in darker stronger cigars. So I like that this blend breaks the notion that a cigar is as strong as its wrapper is dark. At the same time, there’s still some room to grow in this introductory profile.

Flavor developments are not altogether ordinary in the first third. Some medium pepper comes through the retrohale. Two minor notes join the fold here – espresso and graham cracker. Although at this point the notes are both so minor that they’re nearly not worth mentioning. Leather and oak still dominate this profile. There’s also a subtle sweetness from the light up. So at this point, the only thing that could be asked for is better balance.

Ask and you shall receive. The second third has brought about better balance… at least better balance for that graham cracker note. Even sweetness is in better form through the middle of the cigar. The only piece of this flavor that is still not fully aligned with the rest of the profile is that espresso note, which still lags far behind the rest of what there is to taste.

As this blend comes to a closing, the espresso note has finally come front and center. Now this note dominates much of the profile. The graham cracker note is nonexistant at this point. And this is when espresso has become a dominant force in this cigar. There’s not much else that goes on at this point in the cigar.

The overall experience with the Diesel Sunday Gravy has been a nice one. For the most part, this medium strength blend has produced some rugged and stout flavor. There are no significant transitions of falvor, but if you’re a Diesel fan, you’re likely in for a familiar and reliable ride.