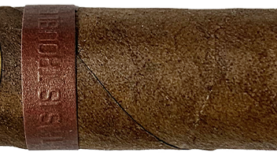 Caldwells 2021 Blind Man's Bluff 'This Is Trouble' is a limited edition blend that deviates from the rest of Caldwell's catalog. Light one of these up to get notes of cinnamon, almonds, pepper, and raisin sweetness. This blend also features a strength that's above what Caldwell fans might typically expect. And there's an amazing consistency to the flavor that will give you the full experience all the way through the last puff!

Caldwell Cigars stand out from the rest of the herd with unique blending, leaves, looks, and flavor. It’s what built the cult following that Robert Caldwell’s brand has today. But the Blind Man’s Bluff 2021 This is Trouble is something a little unique even among the other blends. It’s one of very few cigars in that catalog that uses Nicaraguan fillers, and comes with a Mexican San Andres wrapper leaf. My question is – can this limited edition blend do justice to the rest of the lineup and pump out the kind of flavor that is expected of a limited release? And the only way to find out is with a cut and a light!

Robert Caldwell has the reputation for being a kind of eccentric guy, so it’s fitting that his cigars are not… run of the mill. Typically when lighting up one of his cigars, there’s commonly the smooth earthiness that comes with aged Dominican Tobaccos. The 2021 Blind Man’s Bluff is a bit of a deviation from the typical Caldwell flavor. This three country blend comes to life with pepper on the retrohale. It’s not an overwhelming pepper, and certainly the kind you would expect with a cigar with Nicaraguan leaf in the filler. On the tongue, there are two notes that emerge within the first few puffs – cinnamon and almonds. Strangely, these two hit with near perfect balance. It’s a respectable starting profile. There’s room to grow, but more than was expected for the kick off.

The first third was hit with a pretty bad burn issue. Canoeing on one side pushed a lot of the flavor away. But as soon as I touched up the wrapper with my torch and evened out the burn, the flavor came straight back to life. The retrohale pepper is surprisingly still completely intact after nearly two inches of smoking. Typically, pepper is a flavor feature that can fall away after light up. At this point, it looks like it’ll be here to stay, at least for a while. In addition to almonds and cinnamon, wrapper sweetness has joined the profile in a brilliant way. It’s a raisiny sweetness that pulls up in perfect balance along side the rest of the profile. There was a surprising amount of balance at light up, but the sweetness element joining really turns this into a well rounded flavor.

Through the second third, that pesky burn issue never resurfaced. The burn remains even without any need for touchup… but for whatever reason, the ash is very flakey and splintery looking. It’s a strange construction, especially as the ash wasn’t weak, and required at least a little force to remove. Kinda weird.

Even flavor at this point in the smoke has been strange. Cinnamon and Almonds are less discernible from each other as the notes (along with sweetness) are melding together. Now I’me getting this medium plus strength flavor that’s kind of muddled and mixed together. That one is hard for me to describe. It’s not necessarily a bad thing for the Blind Man’s Bluff. But it certainly is a deviation from the typical smooth well balanced second third of most other cigars.

The final third of this already abnormal smoking experience is actually one of the craziest parts! The flavor profile from the first third, with all it’s elements, remains completely intact. And it does so even as I smoke my way into the last 3/4 inch of the cigar. This is where I typically find muted flavor notes, heat, or even bitterness. But with this limited edition blend, it’s all class all the way to the last puff. That’s a pretty impressive point for consistency on this cigar, and not something I’ll be holding my breath for finding again soon.

I like the Blind Man’s Bluff 2021 This is Trouble release. It doesn’t have a wildly complex flavor, but the profile is well filled out with a punchiness that’s not characteristic of Robert Caldwell’s other blends. If you have had this cigar, please drop a comment down below and let everyone know what you think about it!