What makes some cigars more expensive than others? 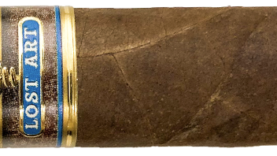 Today, we’re taking the Alec Bradley Prensado & Prensado Lost Art head to head to see which one of these two sister blends can truly provide the best experience. The Prensado is known for it’s position as the 2011 Cigar of the Year in Cigar Aficionado Magazine. That makes it a pretty formidable opponent for the Prensado Lost Art, which is a followup to the original Prensado with a whole new blend.

In this Smokedown, we’ll take these two blends through three rounds to examine their Presentation, Construction, and Flavor. Each round has 3 points which determine who wins the round. Let’s jump in.

Presentation is critical to cigars because they’re all made of the same thing, and without a clear presentation, it would be very difficult to tell most cigars apart. Plus a cigar’s wrapper leaf is a big part of presentation that can be a big sign of what you’re getting into. A cigar with a beautiful wrapper leaf won’t point to any possible issues while smoking while a bruised or broken wrapper leaf might be a sign of more problems to come. So let’s take a look at the look of these two cigars.

These two cigars present nearly identical wrapper leaves. They’re both a medium brown color (almost a Colorado color). They even have the same amount of slight bruising. While they’re nearly identical, they’re not exactly the same. The Prensado Lost Art displays a slightly more vibrant color and sheen. It’s a small advantage, but an advantage nonetheless.

Both of these cigars display a high quality triple cap. It’s the kind of thing you always want to see on a quality cigar. However, even among two very similar triple caps, these two still aren’t exactly the same. The cap on the Prensado is just a little deeper, which is a sign of quality to me. I’ve seen a lot of cigar smokers lop off way too much with a guillotine cutter. So a deeper cap will be an advantage for many. For that reason, the Prensado takes the point here.

Both of these blends are very similar with regards to the artwork on the band. But they both don’t communicate equally clearly. The Prensado famously has a design on the band that looks like a football… I’m pretty sure it’s not supposed to be a football themed cigar. In any case, this point goes to the Prensado Lost Art, who’s band doesn’t send any mixed signals.

Construction is critical to the experience with any cigar. You can find a blend with immense flavor, but if the draw is too tight the flavor won’t matter. Or you might find a cigar that offers a lot of flavor transitions throughout, but if it won’t burn straight then you won’t experience any transitions of flavor. So let’s dive into the makeup of these two Prensados.

This one actually surprised me. I fully expected the original Prensado to hold a long sturdy ash. But the ash fell off after about a half inch. That happened in stark contrast to the Lost Art, who’s ash stayed for more than a inch and a half before falling off. So this point goes to the obvious Prensado Lost Art.

The draw on these two is very similar. Neither of them are too tight or too loose. But when puffed one after the other, I get slightly less resistance on the original Prensado. For me, that’s an asset, but it should be noted that a looser draw isn’t everyone’s favorite thing. I’m sure there are plenty of cigar smokers out there who would have awarded this point in the other direction. But I gave the point to the Prensado.

In this category, I ended up choosing the lesser of two evils as both cigars had real burn problems. But the Lost Art pulled way ahead here as it burned even enough that I never needed to touch up with my lighter. The original Prensado had consistent burn issues throughout the smoke, and I had to touch it up several times. Obviously, for this one the point goes to the Lost Art

This is the round that matters the most. Assuming that a cigar has a presentation that catches your eye, and a construction that allows you to taste everything the blend has to offer, flavor really is the most important thing. It’s what loving cigars is really all about.

These two both offered nice complex flavor profiles. At the same time, they offer two very different medium bodied flavor profiles. The original Prensado is a smooth medium bodied cigar with notes of almonds and cinnemon. The Lost Art is a little stronger with a very different profile. It has notes of roasted almonds, cinnemon, and citrus. The point on this one goes to the original Prensado for me. It’s a smoother creamier blend, while the Lost Art has a little more grit and pepper to the flavor.

Consistency is a measure of how consistent the flavor of a cigar is. If you light up a stick and it gives you all of it’s flavor from light up and that flavor lasts until the final puff then you have found a cigar with amazing consistency. When it comes to these two cigars, the original Prensado gave me much more of the overall profile from lightup. The Lost Art just took longer to come to life.

For me, the Lost Art wins on presentation and construction, while the original Prensado wins out in every area of flavor. But ultimately, it’s your opinions that really matter here. So please drop a comment with your feed back on the Alec Bradley Prensado and Prensado Lost Art… or both!

Where Did Cigars Daily Come From & Where Is It Going?