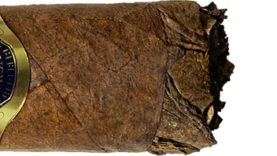 The Aganorsa JFR Lunatic Mad Folk is a short fat cigar at 4.75x70. It's certainly a size for someone who likes or wants to try a larger ring gauge blend. The flavor is a balanced blend of medium bodied notes including cedar, floral, almonds, and cinnamon. This cigar also features a brushed foot, which means you get to taste the the binder and fillers before you get into the influence of the wrapper. While this one heated up in the final third, the first and second thirds offered a decent medium bodied profile.

The JFR Lunatic Torch ‘Mad Folk’ couldn’t have a more fitting name! You might just need to be mad folk to smoke this mammoth 4.75×70 cigar! It’s comprised of Aganorsa’s world famous leaf, and features a brush foot where the wrapper leaf doesn’t extend all the way to the bottom of the foot. I know JFR Lunatic is a popular and flavorful line. But my question is – can this fatty cigar still pump out all the flavor that Aganorsa fans have come to respect? The only way to find out is with a cut and a light.

I don’t usually start out reviews by picking on a blend, but I also don’t review a lot of 70 ring cigars. This thing is mammoth, and I have to tell you that the mouthfeel is… uncomfortable. My Colibri V-Cutter hardly scratches the cap. And I actually have to make two cuts just to get a respectable draw.

The other significant feature on this cigar is the brush foot. The wrapper leaf doesn’t extend all the way to the foot of the cigar leaving binder and filler exposed. The idea is I’ll get a taste of the flavor without the influence of the wrapper leaf.

At light up, I’m actually surprised at how much flavor there is. I know that the wrapper leaf accounts for the character of any cigar’s flavor. But lighting up the Mad Folk there’s a nice floral note along with some cedar. Not a bad kickoff, and but certainly room to grow.

After puffing through the brushed foot and making my way into the wrapper leaf, a couple of things have jumped out at me. First, the profile is incredibly similar to the JFR Lunatic Visionaries, which is the same blend but a massively different size (6.5×52). In addition to Cedar and floral, I’m also tasting almonds and cinnamon. The cinnamon note didn’t enter the profile until the second third of the Visionaries size. So it’s a welcome addition in the first third of the Mad Folk.

At the 50 yard line, I’m finding a better balance of flavor (as I do with many cigars). Even wrapper sweetness, which was a background note in the first third, has come into balance. Otherwise, there have been no real transitions in flavor.

The ash on this blend held up until about the middle of the second third, which is a little over 2 inches long, and a respectable sign of great construction for any cigar.

Coming into the last little bit of the Mad Folk and it has gotten strong, and hot! So much of the flavor profile has fallen away as this cigar heats up. The only discernible aspect of flavor that remains is nuttiness. And that nuttiness isn’t anything to write home about as the actual smoke is getting incredibly hot. This cigar has lost points for consistency in the final third for how much of the experience has fallen away at the end. But none of that takes away from the first two thirds, which were a great example of quality medium bodied Nicaraguan cigar flavor!